The Legacy of The Parent Trap / Family Films Projects 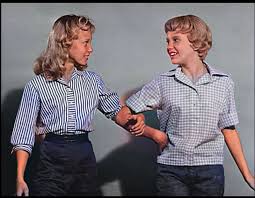 “The Parent Trap”, the classic film and the production but also the sequels in 1986 and 1989. In 2002, Les Perkins produced for Disney The Parent Trap: Caught in the Act, a 20-minute film that glanced over in passing.

The Parent Trap II and the sequels but did not show on-camera of the actors outside of Hayley Mills, and the top-billed actors, Maureen O’Hara, Susan Henning, and Joanna Barnes from the 1961 original film.

None of the actors from 80s Parent Trap remakes even appeared on-camera.

Ed Horwitz was the line producer for “The Parent Trap II” and now works for CBS-TV. He shares about his time on the 1986 sequel.

Deborah Amelon was the original scriptwriter for the “Parent Trap III” film.

Deborah Amelon, scriptwriter for The Parent Trap III, shares for the first time ever Disney’s unfair treatment of her (while writing the script) and they demanded she chooses between finishing the script or caring for her newborn son before and after pregnancy.

The Legacy of The Parent Trap also features original cast member Kay Cole, who worked on the 1961 film, and Patricia Richardson of Home Improvement and The Parent Trap III/Hawaiian Honeymoon.

Aaron Wolf shares thoughts on Emil Erich Kästner who wrote the German book, which was the basis for the story, of “The Parent Trap”.

You will also learn German author Erich Kästner and his 1949 novel Lisa and Lottie, which was the basis
for The Parent Trap, as well as some of the many different interpretations from around the world. The Legacy of The Parent Trap is a great opportunity to be involved in an amazing Disney approved production about one of their most famous films. Almost all our interviews are finished, and we have 95% percent left to finish the film.

We hope to finish the film ready by the upcoming holidays of 2020! In these trying times, we appreciate what you can do for us!

Please note that having a producers credit does not mean you will be making any decisions on the film. It is just the credit and your name attached to the film. One of the several benefits includes that we will add your name on the IMDb page for “The Legacy of The Parent Trap”. The credit is also a great thing to put on your resume, your name attached to a Disney related documentary. If you did donate at another level in the other campaign you will receive those items when the film is finished.

Any additional funds outside of what is needed for “The Legacy of The Parent Trap” – will go towards Family Films Productions, “ELVIS & DOROTHY” streaming show/series of events.

The Legacy of The Parent Trap

Loved these films. I have been a fan of Hayley's forever.

All 4 of these films were so special to me as a child. Hayley Mills was my favorite actress for a long, long time. I'm so happy this… Read more

All 4 of these films were so special to me as a child. Hayley Mills was my favorite actress for a long, long time. I'm so happy this documentary is being made.

Was so excited to see you were making this documentary. You have no idea what the 4 Hayley Mills Parent Traps mean to me. Can’t wait to… Read more

Was so excited to see you were making this documentary. You have no idea what the 4 Hayley Mills Parent Traps mean to me. Can’t wait to see it. Many thanks from an Australian fan.